Life is good, and busy.
It’s been so long since I’ve posted, I don’t even know where to begin!
Cooper is doing very well; he just delights us every day. We couldn’t have asked for a better transition to his new school (which happened almost 7 months ago, where does the time go?!). He’s talking much more, we’ve recently had another “two steps forward and holding” – especially in expressive language, and we are thrilled and so incredibly thankful for that. We still have “rough times” – don’t get me wrong, but I think a lot of it is “growing pains” and we are all just getting used to all the changes.
This spring we tried baseball “buddy ball” where we had some truly fantastic “buddies” who did their best to get him interested and make baseball fun for him, but, sadly, he has absolutely no interest in baseball; we gave up. And since he loves water, we also tried “adaptive aquatics” – he still loves the water, he simply had no interest in their “agenda”; so, again, we gave up. These things are supposed to be fun, and it was pretty much the opposite for him (and certainly no fun for mom and dad either!) So, those sort of went down on the books as “failures” but, no worries, we have had successes too!

A few weeks ago we had our first successful birthday party! The birthday boy was a classmate of Cooper’s (there are only 4 other kids in his class). When we got the invitation I was dreading the RSVP, we wanted to go but pretty much knew it would end (after 5 minutes) the same way all the other birthday parties we’ve attempted have ended, badly and loudly. Because, in the past, I knew those parents really well it wasn’t that big of a deal, but we didn’t really know this family…so I debated until the RSVP deadline and finally emailed our “regrets” and just told her the truth, just put it all out there. Within a few minutes the phone rang and it was the mom of this child basically saying that it would be very low key and if we wanted to try etc. So, we tried! And he did SO well! Their extended family was there and most of the kids from his class. She was right, it was very laid back and everyone “understood” – & Coop shocked us again! We were so proud of him. He even wore a shirt with buttons!! (and we didn’t hear “ALL DONE BUTTONS!” even once!). And maybe the funniest thing… he didn’t want to leave! No, probably the funniest thing was when I sat down in a lawn chair and it broke, slowly… in that slap stick comedy sort of way where my knees sort of eventually ended up under my chin…
Last weekend I did a show (Northern Virginia Fine Arts Festival – my first show since Kentuck ’09!) and Grant had Coop all to himself for the weekend. The show was great, delightful neighbors, wonderful volunteers, beautiful weather, great patrons, and even though I knew they were perfectly fine without me, I still missed “my boys” a little. Grant had made “big plans” for the two of them, I admit I was a little unsure upon hearing these plans, but really, I knew that good or bad, if anyone could handle Coop and these “big plans” it was Grant. He had planned to take Coop on the metro to the national zoo… Periodically Saturday morning I would get texts saying things like “we made it to the metro station and parked, so far so good” and then finally an hour or so later “we are at the zoo having a snack!” Cooper loved it, the metro maybe more than the zoo, and he calls the metro “the macro” – we both think it’s too funny to correct at this point. On Sunday they surprised me at the show. Grant has tried that half a dozen times in the past and it never goes well, so this was another first! Coop was really happy to see me and he wanted “mama go in the car, go home” but seemed to understand that I had to stay and work. No tears, no issues, a real victory!
On Monday, sunburned, bruised and exhausted from the weekend, I started the move into my new studio at the Lorton Workhouse. I’m probably 95% moved and 75% settled; hopefully by Monday I will be able to actually start working! The other artists in my “house” (cell block?) have all been really great, and very helpful, so I think it’s going to be a good fit for me. We are required to work a certain number of hours in our studios each week, and even though I’m used to working about twice the required amount, these are “public hours”, so that’ll be good to keep me from being a complete (studio) hermit!

I’ve been trying to find an art program for kiddos like Coop (like the VSA) but so far I haven’t found anything tailored specifically toward the needs of these kids, so, who knows, maybe I’ll start one. It’s sort of been on my mind a lot lately, obviously it’s never far from my heart. We will see what comes of it!

There was an error retrieving images from Instagram. An attempt will be remade in a few minutes. 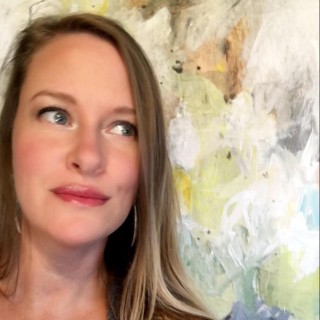 Mixed media & encaustic artist, autism mom, AL native, avid reader, secret writer, organic gardener, people watcher, cuddle junkie, vitamin addict nutrition enthusiast living in Northern VA. Whether by choice or necessity, I am blessed to be living an artful and creative life. Join me on my creative journey, amidst it all.